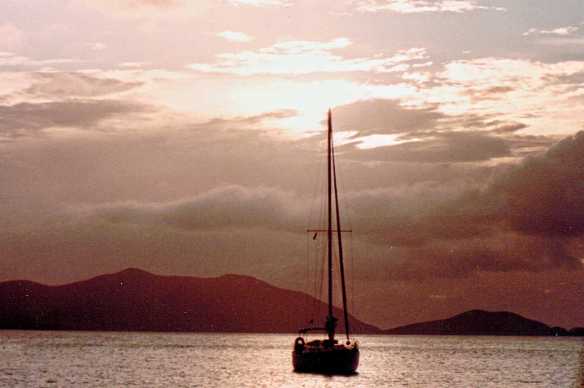 I wrote this poem long ago, and never shared it with anyone until today.

Patterned Dark and Light: To My Son, Age Six

You’re such a lovely boy, so structured like
a flower: skin so white and bones so light–
one breath and you might be forever blown.
Yet in this face of innocence you hide,
lashes unfurled like canopies to shade
your eyes—strange pools where secrets swim and dive.
For you are patterned dark and light. Storms brew
in you and lie along your shadowed face
where I can’t see. I wonder where they rise?
And where, in what far sea, they’ll rage and die.

I was trying to capture this strange phenomenon who happened to be my son. He mystified me, all that beauty and innocence, the sweet hugs and kisses, the dark furrowed brow and swirling emotions, all clashing together, in a stormy rage.

I was never satisfied with the poem though, and especially with how it ended–the word “die” disturbed me, even though it referred the storm’s end, not him.

So later I added this second part:

Sometimes I gather you to lap to find
That I can never hold the length of you:
Your fullness spills with ambiguity
And races toward dimensions past my grasp.
I must confine content to legacies
In lap. How is it I still hold what you
Outgrow? So well I know that spiraled shell.
I turn it feeling fine and subtle threads
of you, while at its core, all that’s true.
I lift that hallowed lip and wait to hear
Intuitions of you, forever near.

While I could never fully know the extent of him, I felt I knew his core. I could not hold onto him, but I could hold onto that, even if that was only the faint whisperings of what I knew him to be. What I cherished in him.

I’m holding onto that still.

But an insightful reader of my last post said something that made we realize that I cannot separate out his darker and lighter sides. He wrote:

“Looking at people with duality can help cope in crisis but it’s ultimately our single all-encompassing selves that we have to see to heal.”

“Remember HE is just another man trying to cope with this life. The problem is probably that he was too sensitive at too young of an age to learn healthy ways to cope.”

I think he’s right. I used to quip to other mothers how my son entered his “terrible twos” when he was only one and never outgrew them. At one point I felt I should never have a second child because I would never be able to handle two of him, nor could I love another child as much as I loved him.

It turned out not to be true, of course, when my daughter was born. But it shows not only how deeply I loved him, but how helpless I felt, even then, in my mothering of him, in helping him find healthy ways to cope with those swirling emotions.

Looking back, those difficult times with him were nothing compared to what we nave been going through coping with his addiction.

Perhaps it’s not surprising he has tattooed across his chest the words: “Rider on the storm.”

On his back below the nape of his neck rests a compass rose with true north pointed upward.

He’s still riding his storms, and I’m still there by his side, riding them out with him. We’re both waiting for them to end.